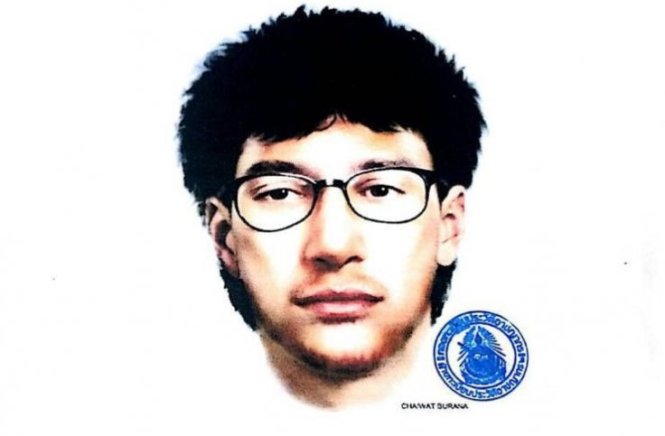 Almost one week from today, on August 17, a bomb exploded inside of the Erawan Shrine at the Ratchaprasong intersection in Bangkok, Thailand. The blast killed 20 people and injured as many as 125 people. There is surveillance footage with a man leaving a backpack at the shrine just before the explosion. The Royal Thai Police have said that there was 3 kilograms of TNT was stuffed into a pipe and placed inside the backpack. They believe that an electronic circuit could have been used, which was found 30 meters away from the shrine. The suspect, Mohamad Museyin has not been arrested yet.

The man, who police say is a foreigner, was captured on security footage at the Erawan Shrine. Thai police are looking at budget Bangkok hotels on the Sathorn Road area, where he is believed to have stayed. Motorbikers and tuk-tuk drivers who may have picked up and dropped off the man have also been questioned.

Another suspicious surveillance video that was obtained by the Thai media shows a man in a blue shirt putting a bag on the ground and kicking it into the water some time just after the explosion that would have been several miles away at the Erawan Shrine. 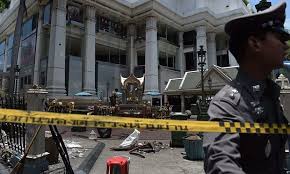 Pol Gen Somyo Pumpunmuang, the deputy national police chief said that they have found enough evidence to suggest that the bombing involved several people inspecting the site in advance, finding the components to make the bomb and plan an escape. The size of this team has been estimated to include 10 people.

There was also a second explosion the following day. On August 18th an explosive device was thrown from a bridge near the busy Sathon pier. Luckily, it did not cause any injuries because it did not explode until it was in the water. Police believe that it was a grenade that was thrown. If it had exploded before it hit the water, it would have caused injuries. It is still being investigated whether these two accounts are related to each other or carried out separately.

No terrorist group has claimed responsibility for either of the bombings. However, potential groups of suspicion are international jihadists, members of Thailand’s souther Malay-Muslim insurgency, China’s Uighur minority, militants on both sides of Thailand’s political divide, as well as just a group of individuals with a personal grudge.

The Thai police have promised to release information to the public once it does not need to be kept a secret – which they have kept their promise with us so far.