I have a special interest in marketing and like working aside the visual types that understand that the arrangement of a message is just as important as the message itself. The biggest lesson that I have learned is that if messaging hierarchy and appearance are not intuitive, then confusion will surely follow. 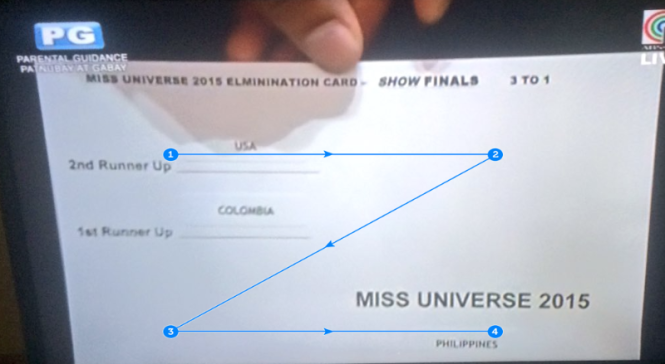 Steve Harvey was quick to point out that it was hard to read and I agree with him. It is true that the messaging hierarchy corresponds with the announcement order. However, placing the winner and the runner-ups on separate sides requires Harvey to know to look for the winning country at the bottom right.

Is it fair for us to assume that Harvey would know where to look? Especially take into consideration that this is likely the very first time that he is seeing the card – and he has millions of people watching him. In order to assess this part, we need to apply the Z-Layout, how our eyes process information. Our eyes begin in the top left before going to the bottom right, forming the “Z.” Going by this principle, it is clear that “Colombia” would be read before your eyes land on “Phillippines” at the bottom right. Harvey probably picked up on the “1st” next to “Colombia,” making it easy to understand how he got confused with the results. 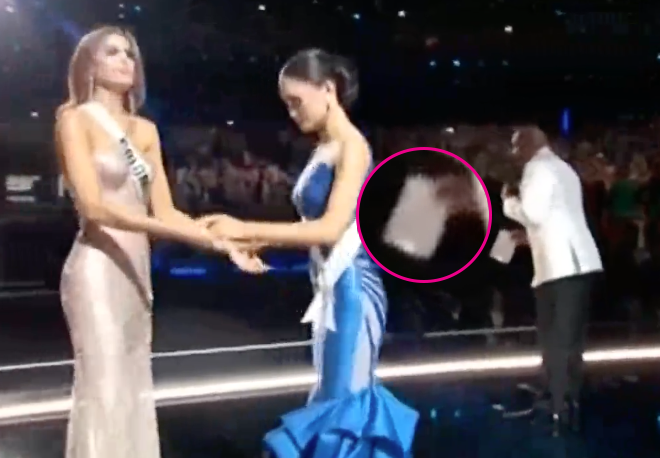 We can also see in photos that with the way that Steve Harvey was holding the card, he may not have even seen that there was a winning country listed under “Miss Universe.” Further, holding the announcement card would have drawn his eyes more towards the center of the card and avoiding that corner completely.

Though I am not a designer, I would have the results printed in the center of the card, listed in the order that they should be announced. Further, you could even shade each individual result darker, making “Miss Universe” the darkest so that the importance is understood.